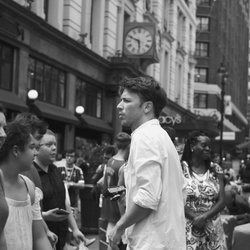 Hi! I am a portrait, street and documentary photographer based in New York. My series of black and white street photography - New York Chronicles - comprises photographs I have been shooting in all boroughs of New York City since 2008.

I am predominantly a candid shooter drawn to quiet moments in the streets. I like to single out subjects from the crowd rather than construct complicated images with multiple subjects in the frame. My fine art background favors the use of wide aperture, but often not wide angle.

New York Chronicles have been published on The Guardian, Lens Culture, Huff Post, Al Jazeera and, for a year, every week in the New York's legendary newspaper The Village Voice before it went paperless in late 2017.