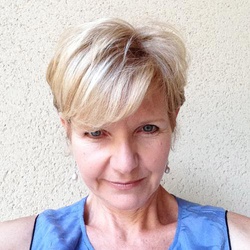 Hello. Allow me introduce myself: my name is Mary-Jane Roussel. I’m Canadian -- and French! I come from the Kawarthas (in Ontario) and live in the South of France. I’m the chief-cook-and-bottle-washer at creatuto.

In addition to managing the creatuto.com website, I occasionally do classes for adults in our pittoresque village as well as workshops in primary and junior high schools.

When I’m in a classroom, kids often ask me, “How long have you been doing calligraphy?” & “Why do you like Calligraphy?”

To the first question, I answer that as a child, I went to Church every Sunday. Some kids paid attention to what the preacher was saying; others stared at the stained glass, waiting for the minutes to tick by. For my part, I generally spent my time in Church copying and re-drawing the lettres of the song titles, which were written in a Gothic hand in our hymnbook.

As for their second question, I usually tell them that if you believe in reincarnation, I must have been a monk in a former life!

Perhaps you’d also like to know that I am a trained Fashion Designer, but I spend much more time designing letters than clothes!

An introduction to traditional calligraphy by Mary-Jane Roussel US $19.97
beginner
47m
14 lessons